Part 3: The Last Part of the Journey

The next three photos were taken on a rainy day. 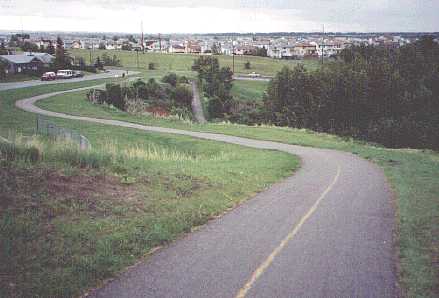 This is where the path loops back down close to the river. Later, it goes under a road and through a park. In this photo it looks like the steepest part is towards the bottom where it loops back, but actually it is at the top, near where this photo was taken.

I had gone down this hill many times before and the pavement was still giving good traction, so with an emergency exit plan firmly in mind I was able to break my way down the hill without any difficulties. 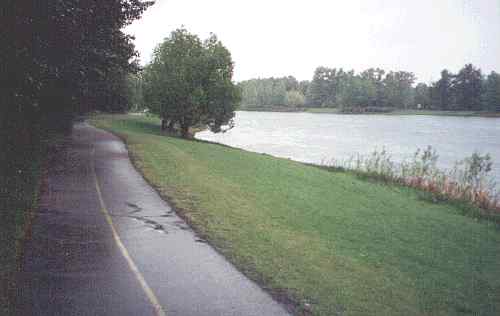 This is the lake at Cauburn Park. It is now raining fairly hard
so I had to stand in the shelter of some trees to take this photo.
The gazebo is only 5 minutes away. 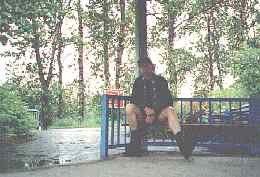 Here is some shelter at the gazebo. For this trip I had packed a few extra clothes so was able to keep warm. When the rain subsided instead of trying to finish the run, it was off to the bus stop. 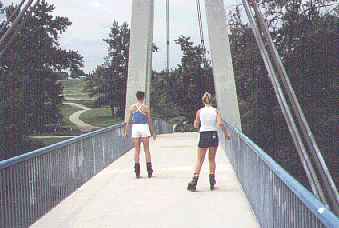 On a better day, I left the gazebo and crossed the river. These girls were also headed south. 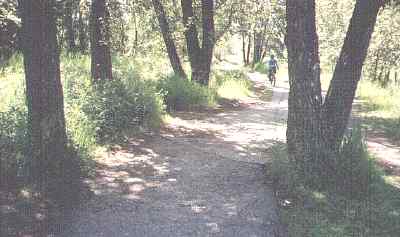 Soon, the path is running through the trees not far from the river.

In the shade at the bottom of this photo you can see that the path is rough. This might be the most dangerous part of the trip. The first time I hit this rough part I was going slow and careful, so only experienced a strong grabbing at my inline skates. The surprise required a quick reaction to regain balance. Since then I watch for this hazard, come to a stop, and then walk across. 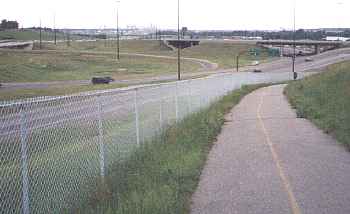 As you climb this hill, you can look back and get this view. The Deerfoot trail is in the foreground and the city core is in the distance, a little left of centre at the top of this photo. 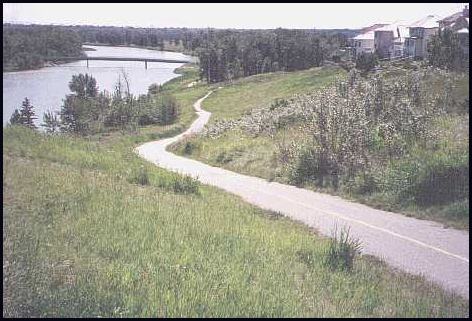 This is where the path takes you down into Fish Creek Park.

Since most inline skates don't have good breaks, it is best to take your skates off and walk down. It took a number of years of practice before I took a chance at running down this hill. I had practiced a lot at breaking on smaller hills, had developed good balance, and had thought through an emergency escape plan. My mind was prepared to react instantly to a loss of total control or to increased speed; to vear to the side and fall into the grass.

After crossing the flat part of Fish Creek park, we finally see the end
of the journey. Lake Sikome is on the left.

As it turned out, the black clouds moved away and we had some sunshine. 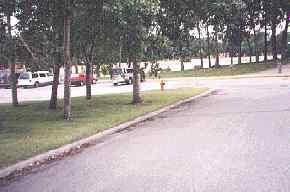 This photo was taken while gliding through the parking lot
and approaching the lake. 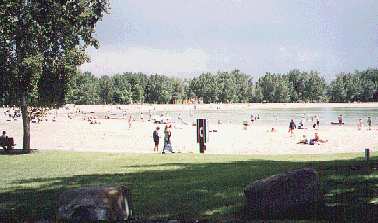 The reward that comes at the end of the journey is a cool swim
in Lake Sikome, showers, and food. But if it is not July, August, or
the last part of June you will find this area mostly deserted.

After 3 to 6 hours of skating, it is a little too much to do a return run. Instead, you can walk from Lake Sicome to the top of the hill, catch the bus, and then use the C-train, a return trip that can take another 2 hours.

back to the future.

to a file about the need for safety.