Background:
Jack and Lou got married in 1908, and during the next 15 years they had 8 children. In 1916, they moved by train from Listowel, Ontario to the West, and eventually settled near Youngstown, Alberta.

As their family grew up on the farm, they had many interesting experiences, they lived a fascinating lifestyle, and they became part of a thriving rural community.

This is all in the past. Today, the lifestyle of the remaining farmers has changed, and many of the rural communities have disappeared. What follows is an attempt to recreate the times of Jack and Lou by organizing and retelling the memories of some of their children.

Moving To Their New Home:

After growing up, marrying and starting a family in Ontario, Jack and Lou decided to head west by train. In 1916, they loaded their livestock and furniture onto a combined freight and passenger train. Friends and relatives were at the station, and many tears were shed as they pulled out at 2:00 o’clock. At this time, they had 5 children to look after. Sheldon was 7 years old, Helen 5 years, Ross 3 years, Gladys 2 years, and Bill was 6 weeks.

Henry Zinn (Jr.) met the train at Youngstown and took everyone home to his homestead. Henry, who was a bachelor at that time, had to share his 2 rooms with Jack, Lou, and their 5 children for an entire year. Their good furniture was stored in the granaries, and their livestock grazed on Henry’s pasture. 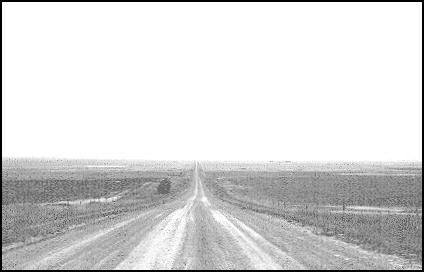 This is where they chose to call home.

This is the road which leads to their farm from the east (photo taken in 1985). Their farm is located close to the horizon in the photo, on the left side of the road. But it probably can't be distinguished due to a slight haze.

to next section: Life on the Farm.