Life on the Farm

Jack and Lou rented a farm from a Mr. Bowie for 1/3 of each years crop. Along with the farm, Mr. Bowie supplied about 10 horses and some tools. This arrangement lasted for about 20 years and then the farm was purchased from Mr. Bowie.

Jack used the one square mile of land to plant wheat and keep his cows. They kept 15 to 20 cattle, about 100 chickens, and sometimes a few pigs. Jack had about a dozen horses. He had about 8 big work horses and a couple of light horses which were used for riding and to pull the buggy. One horse named Lucy was brought out from Ontario with them. She pulled the buggy for many years. They had a dog named ĹJeffĺ that was always frightened by thunder. 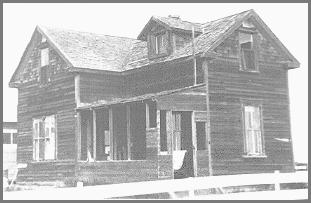 This is what is left of the
front of the house in about 1960.

The house had three levels. The upstairs had a hall and two rooms. One room had two double beds in it for the 4 boys, and the other room had two double beds for the 4 girls. The rooms were not insulated, so the rooms were very hot in the summer, and cold in the winter. In the winter, the chimney brought some heat to the upstairs. There was also a register, which would allow the warmer air in the living room to rise through.

On the main floor, there was a living room in which there was the folding chesterfield that Jack and Lou slept on. This room had a round coal heater. A 20 pound (9 kg) chunk of coal placed in it would last the night. The main floor also had the kitchen. On cold nights, they kept the cook stove going all night in an effort to keep the house warm. In the summer, using the cook stove made the house very hot. Later, Jack built a summer kitchen on the north side of the house.

The bottom level, the cellar, was reached through a trap door. They kept most of their food there. This included pickles, canned fruit, vegetables, meat, butter, and eggs. The cellar had earth walls. The girls were afraid of going into the cellar because there were lizards there. When one was spotted, the boys were called upon to use a dust pan to get them out of the house. 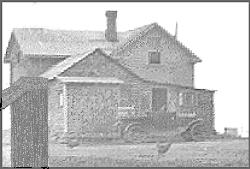 This is the north side of the house. The photo was taken around 1940, after the summer kitchen and a porch had been added onto the north side.

The house had wooden floors, which had to be scrubbed so they would stay clean and white. The wood gradually wore off, so now and then, the nails had to be pounded down. They also scrubbed the unpainted wooden chairs.

In the winter, it was more convenient to take a bath in the kitchen, where they could heat the water on the stove. They used a round tin laundry tub. However, in the winter, they still used the same outhouse. It was located over 100 feet (30 m) from the house. They often used the Eaton catalogue for toilet paper. It was a good thick book which lasted quite awhile.

to next section: Work on the Farm.