Times were hard in the 1930’s. Crops and gardens failed because there was no rain in summer and very little snow in the winter. The last good crop that they had was in 1928. In some years, the wheat grew to be only 6 to 12 inches (15 to 30 cm) high. When it was harvested, they only got enough seed for the next year, and a little feed for the cattle. In 1929, 1930, and 1931, they were completely hailed out, so they had to use the partly grown wheat for cattle feed. In other years, the crops were burnt out and the kernels dried up to about Ľ of their normal size.

The dust storms were bad. Good top soil blew off the fields and especially off the summerfollow. The ditches filled up until they were even with the roads. Sometimes a granary would have about 12 inches (30 cm) piled up around it like a snowbank. However, the farm was on a hill, so the soil blew onto lower ground.

During this time, the garden was very poor. The peas would be all dried up. Green caterpillars, which they called "ARMY WORMS" destroyed their garden twice. Jack tried to save it once by pouring oil into trenches, which had been dug around the garden. The ARMY WORMS crawled in and got stuck. More kept coming and soon they were able to crawl over the stuck ARMY WORMS, and they ate the garden.

They could be seen crawling along the ground in wide strips, a large mass of moving green. They destroyed every plant that was green; everything from leaves on the trees to weeds in the field. When they went through a wheat field, they would wipe out the weeds, but leave the wheat standing.

In about 1931, Jack's brother and family: Bill, May, and their son, Billy Zinn arrived in their Model T Ford. They were hungry, broke, and almost out of gas. They stayed for 3 ˝ months, and worked at temporary jobs. When they decided to leave, they were given fried chicken, baked bread, extra clothes, and a blanket to keep their legs warm. It was mid October, and May was pregnant. With a little money, which they had saved that summer, they headed for the United States; and contact was lost for about 15 years.

During the dry years, they had very little money to spend. They could not afford to buy food such as fruit or cereal. The children would get a jam tin full of wheat, pick it over and clean it. Next, they would go to the granary and put it through the grinder, so they then had ground wheat cereal.

In some years, they didn’t have money to buy gas for their car. Jack put the car up on blocks, and they used the horse and buggy instead. The government helped a little by shipping in clothing, apples, and fish from the east. The fish were very tough and salty. Jack had to go into Youngstown and get what he needed off the train.

The dam was built in 1933. After that, water was hauled in a wooden barrel for about half a mile. A horse pulled the barrel, which was carried on a stone boat. A stone boat, as seen below, is a flat sled with two wooden posts for runners. 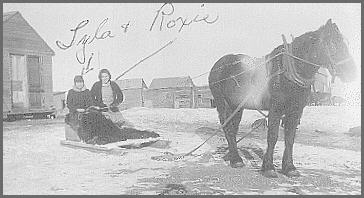 Lyla and Roxy are ready for a ride on
a stone boat.

In the summer, they could now go swimming, and try a little boating. In the winter, there were skating parties and hockey games held at the dam. Before everybody went home, Laura served the children cocoa, sandwiches and cookies. 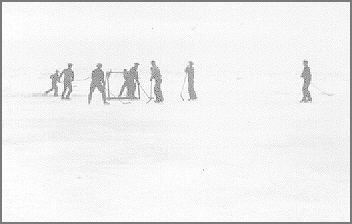 to next section: The Story Comes To An End.