The Story Comes To An End

Early in 1943, Jack had a heart attack. He complained about having a pain in his arm. After seeing a nurse in Youngstown, he traveled thirty miles (50 Km) to the town of Hanna to see a doctor; and then went to the Hanna hospital.

The next day, before supper, he complained to a nurse about pain in his arm. She gave him a shot to ease the pain. A little later, after the nurse returned from supper, Jack was found dead. His supper was untouched. Later, his children speculated that the shot she gave him was the wrong medicine. This happened on January 7, 1943, when Jack was 58 years old.

Jack was buried in Youngstown. In about 1960 his grave was moved to Memorial Gardens, on the east side of Calgary, Alberta. Lou stayed on the farm until 1952, when, at the age of 63, she retired in Drumheller. Clinton took over the farm. Lou moved to Olds in 1969, and died in 1975 from old age. She had lived for 86 years. Lou was buried in Memorial Gardens, next to Jack.

Today, only a few farmers remain in the area around the Bowie farm. It is interesting to note that in 1931, Canada had more than 50% of its population living on farms. In 1941, this had decreased to 27% and in 1981, only 5% of our population lived on farms. Half of Jack and Lou’s children spent most of their lives on farms. [As of 1983] Out of the 20 grandchildren, only three are living on a farm.

The people who own the old Bowie farm, have torn down all of the buildings, with the exception of a small storage shed. They were replaced with new and modern buildings.

Nothing is left on the Crocus Plains school grounds. The old school building was moved into Youngstown where it became part of a Church. 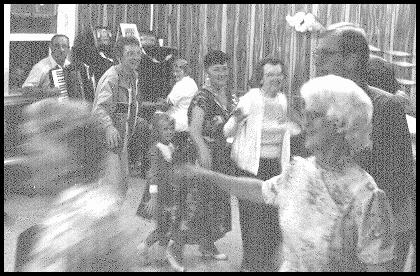 But the spirit still lives on. Country gatherings with small bands and good country dance music still exist. All ages are there to dance and enjoy themselves. This photo was taken in 1989 at the twenty-fifth wedding aniversary of one of Jack and Lou's grandchildren.

back to beginning: Life on a Western Canadian Farm.