It spent decades in the attic of an old unused farm house, until August, 2001. This is when the trunk and all the junk inside were given to me to take home.

At home, I was happy to go through everything and clean off what I could. Mouse droppings can be deadly, so I worked outdoors with my car hatchback open. It was gratifying to discover some real gems, and then post them here where you and I can view them repeatedly with ease, without getting our fingers dirty. No doubt, Violet never dreamt that the contents of her dirty old trunk would one day be made available to anyone in the world who is interested.

Maybe the album was kept under the bed for awhile.
Most of the pages are a little grimy, and about one inch
at the top of the album was chewed away. It looks
like a dog, mouse, or rat got a hold of it. 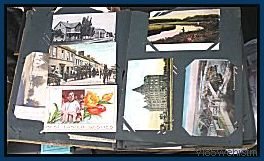 This is a page inside the album.

The album contained many of the photos that are now posted on this Web site with Violet's writings. Most of the album was full of post cards: some illustrations and some photographs. Most don't have any messages. Many of the cards were addressed to Violet's Aunt, Maggie. In fact, the album might have been assembled by Aunt Maggie who spent the second half of her life living in Saskatchewan. This means that the damage to the album could have been caused by a rat. (Alberta is rat free.) Aunt Maggie died in 1942.

This card was also addressed to Aunt Maggie:
On reverse:

In coming years, if I have time, I hope to
post parts of a few of these books.

One extra item that I picked up with the trunk was a broken portable pulpit. It was a shallow wooden box, shaped with a slant on the top to place the reading material, and a 1 inch wooden ridge along the top of both sides and the front. The ridge on one side had been broken off. It looked hard to repair and refinish and had been described to me as not much good for anything.

About a month later it dawned on me that maybe it was broken when "Preacher Brown" got struck with lightning. I dug a copy of this paragraph out of my files. It had been copied from the local history book Valley of the Dinosaurs. As you will see, while my speculation could be true, it doesn't seem likely.

One example of pure dedication shown by the Pioneers would be that of Mr. John Brown of the Verdant Valley district. He came regular, rain or shine to the camp to preach to the people in a shed back of the cook house. One experience was, one day as Preacher Brown as he was known as came to camp a lightning storm came up. Lightening hit the cut bank behind the shed, then hit the metal chimney and went down to a pot bellied stove on which Mr. Brown was leaning on. Consequently, he was knocked unconscious, having a narrow escape which Dad remembers quite vividly.

But since lightning is known as an act of God, I am left wondering what Preacher Brown was saying at the time he was struck.

Please don't misinterpret my reasons for posting all that is in these files. My assumption is not that Violet is an important early pioneer. (The trains ran through Calgary about 20 years before John and Violet arrived.) Also, both the positive and the negative are included, so it is not an attempt to glorify Violet.

For the convenience of those interested
the following brief summary was taken from The MacMillan Dictionary
of Canadian Biography, Macmillan Corp. of Canada Limited, 4th edition.

Most readers who get this far are interested in history, so I can trust them to take what is posted here for what it's worth. Although some people twist things out of proportion, I still dare to point out to the reader, as a simple note of interest, that Violet lived during the time of Lucy Maud Montgomery (the author of Anne of Green Gables). There are similarities between Violet's life and Montgomery's life. For some, knowing this will give more interest and value to the locations in Violet's diary, to the period in which it was written, to some of the photos and post cards, and to Violet's lifestyle. Here is the summary: Montgomery was born in 1874, six years before Violet. Early in Montgomery's life, her mother died. She grew up on P.E.I., and starting at age 14, kept a journal. Montgomery went to teacher's college: at Prince of Wales College in Charlottetown and graduated in 1894. After graduating, she did some teaching. In 1905, Montgomery began writing Anne of Green Gables and completed it in January of 1906. In 1911, she married a minister, then left the Maritimes and moved to Ontario. They had two boys, so Montgomery also spent decades living as mother and minister's wife. Montgomery died in 1942.