Journey to a Homestead

Photographs and Descriptions of an Amazing Journey.

In 1936, Mary Brown wrote: "Pioneering Days In Verdant Valley District by Mary Brown, 1936" which appeared in the Drumheller Mail newspaper. The full account of their journey written by Mary can be found at a site created by Will Krueger.

In about 1954, at the age of 74, Violet Brown wrote down some of her memories which were eventually published in Alberta History (Summer 1985). 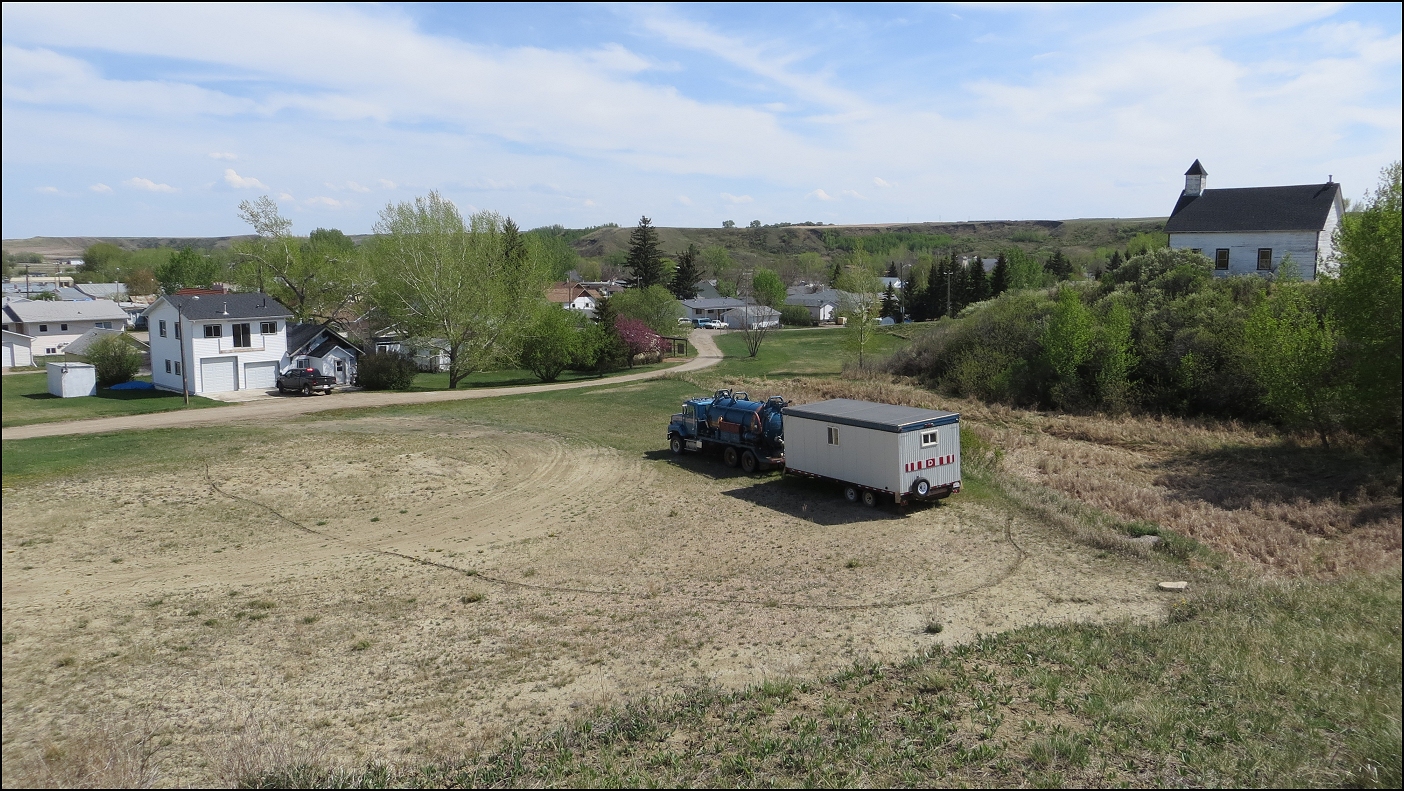 This is a 2016 photograph of the town of Carbon from a hill on the west side.

ADMIRING THE LOCATION OF CARBON 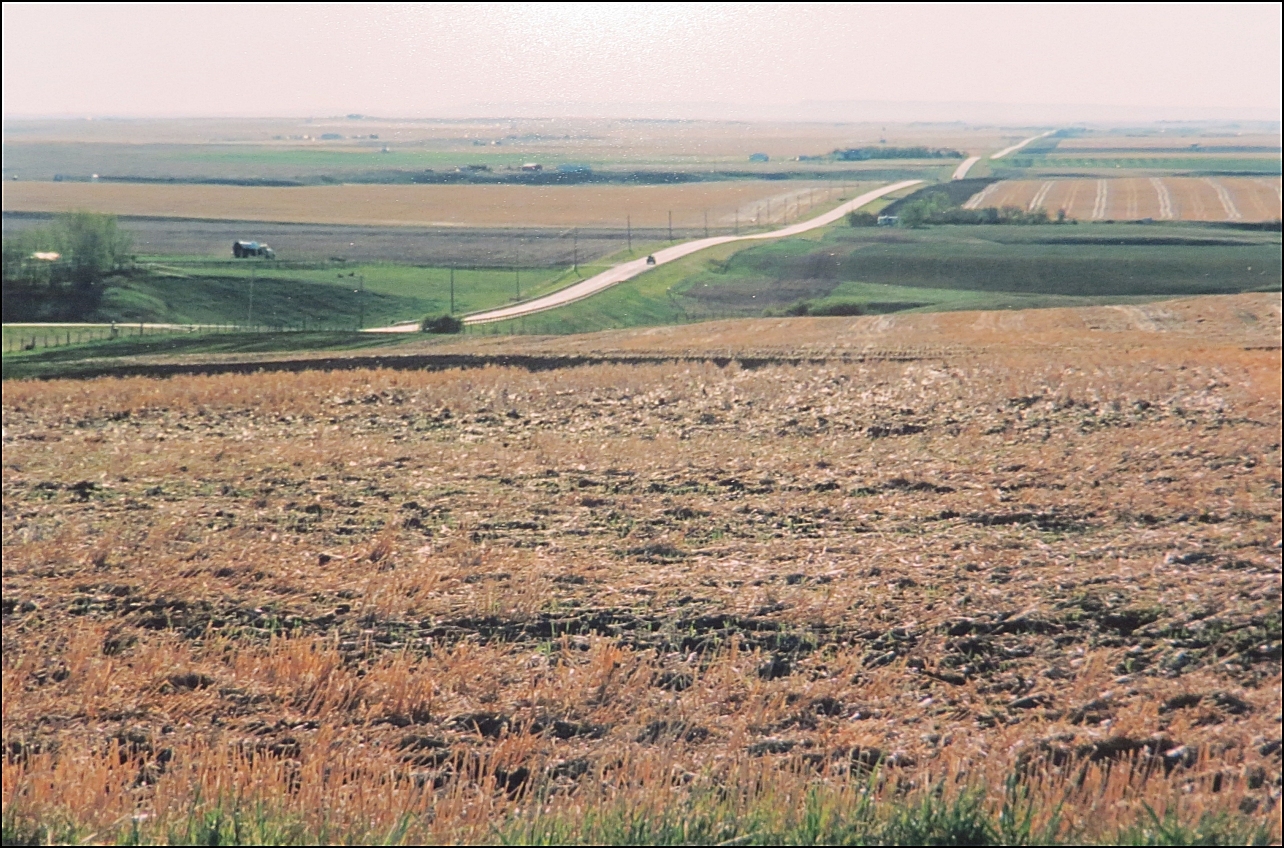 The prairie above Carbon, the route they probably took as they headed east to their shack. 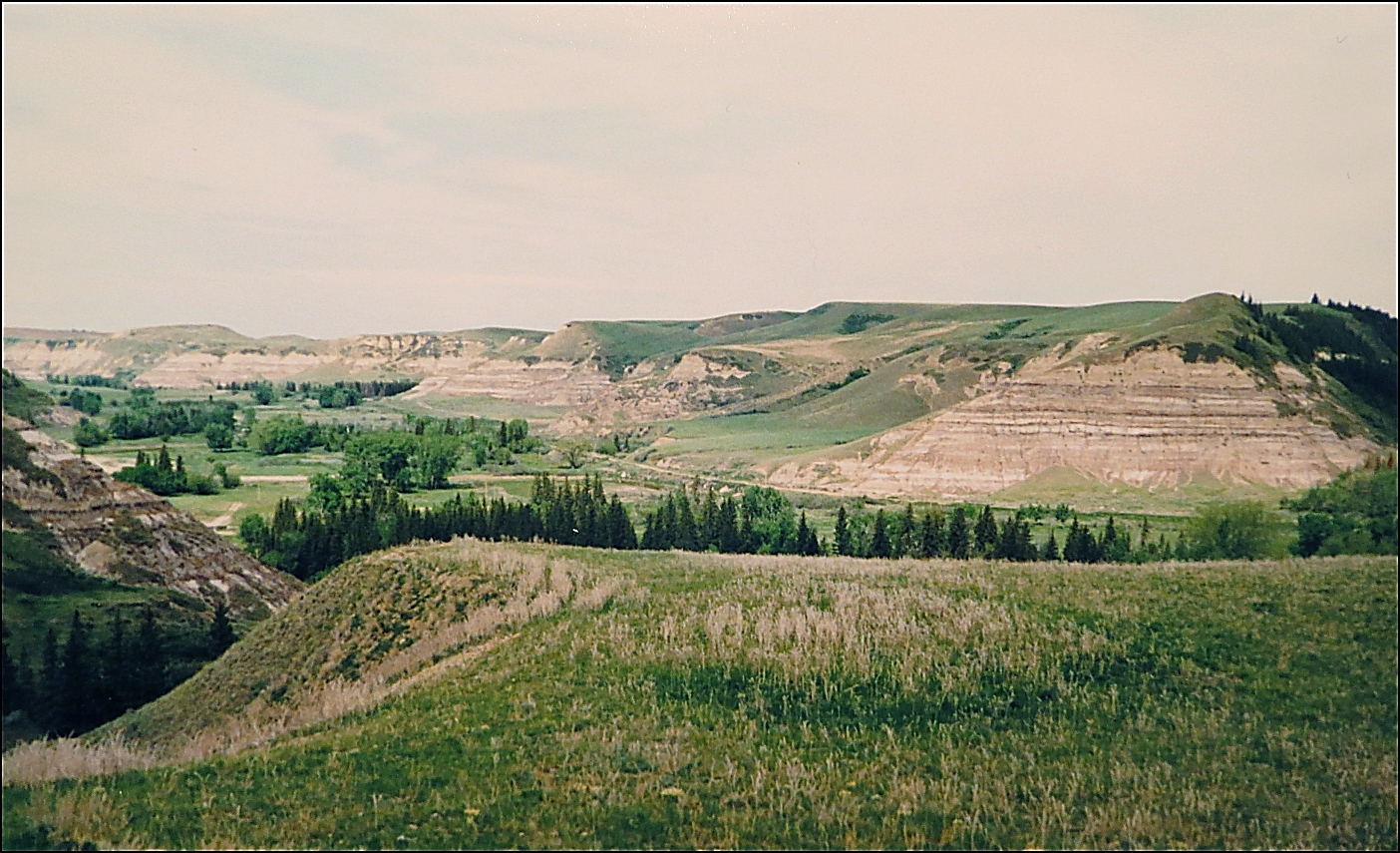 This is the view, looking west at a gentle hill which leads into Kneehill Creek valley. The slope is across the valley from here, just right of centre.
In this part of the valley, there is a high valley wall which would be hard to come down. So this is the probable route that they took. 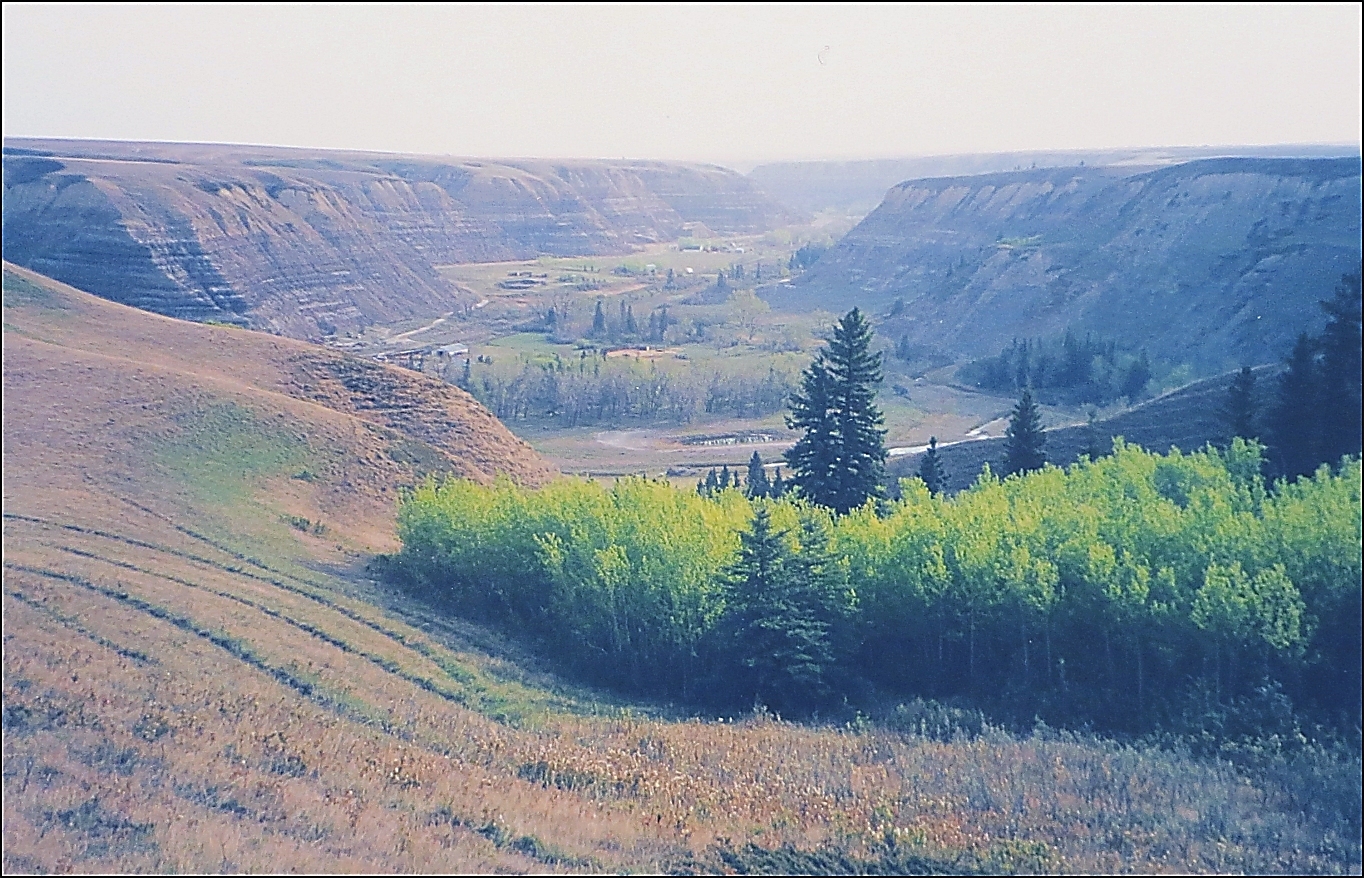 This is the Kneehills Creek valley, looking north-east towards the Red Deer River valley. You can see the steep walls on both sides. 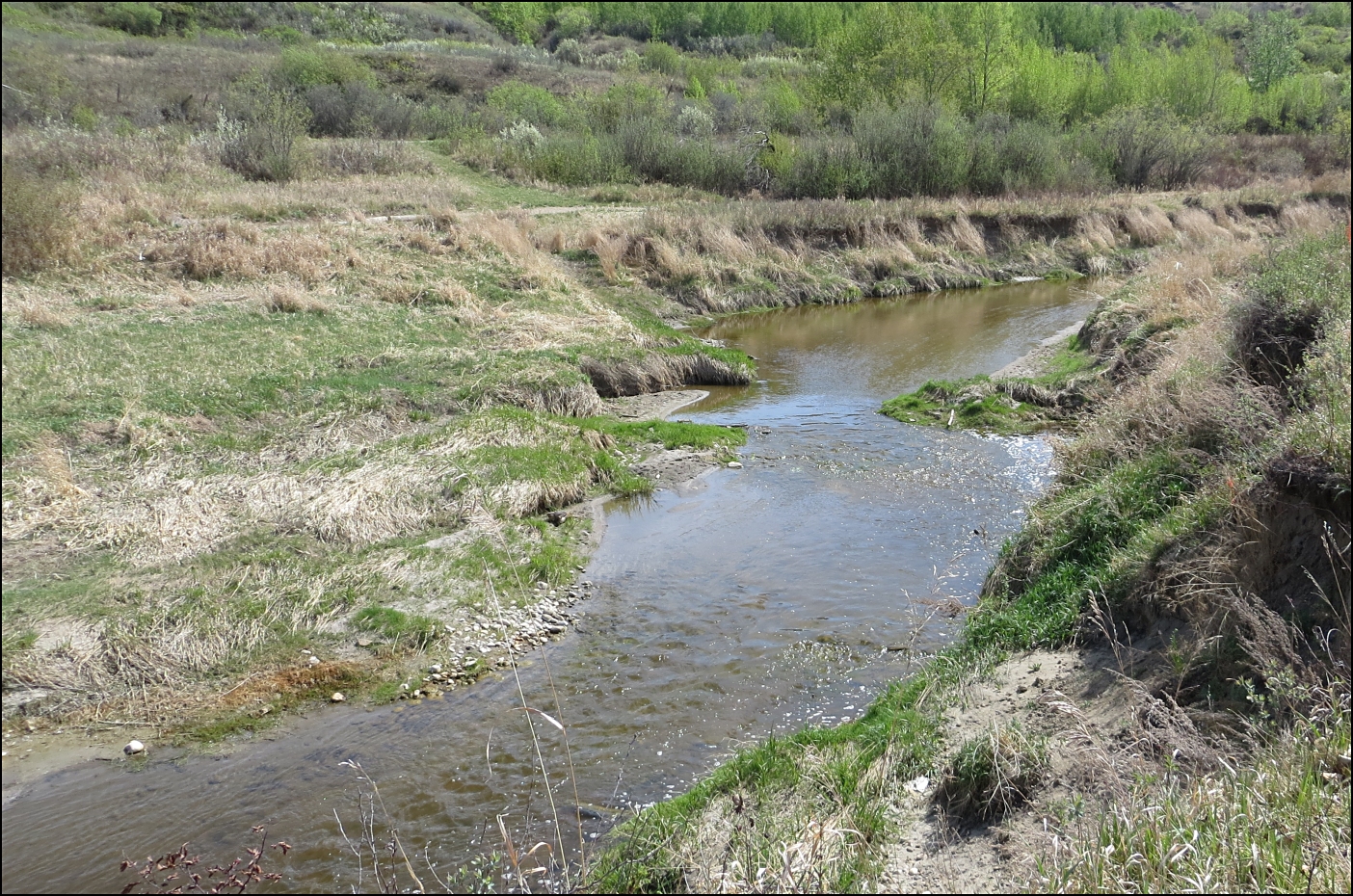 The Kneehills creek in 2016, the creek they had to cross.
[This photograph was actually taken right next to the town of Carbon.] 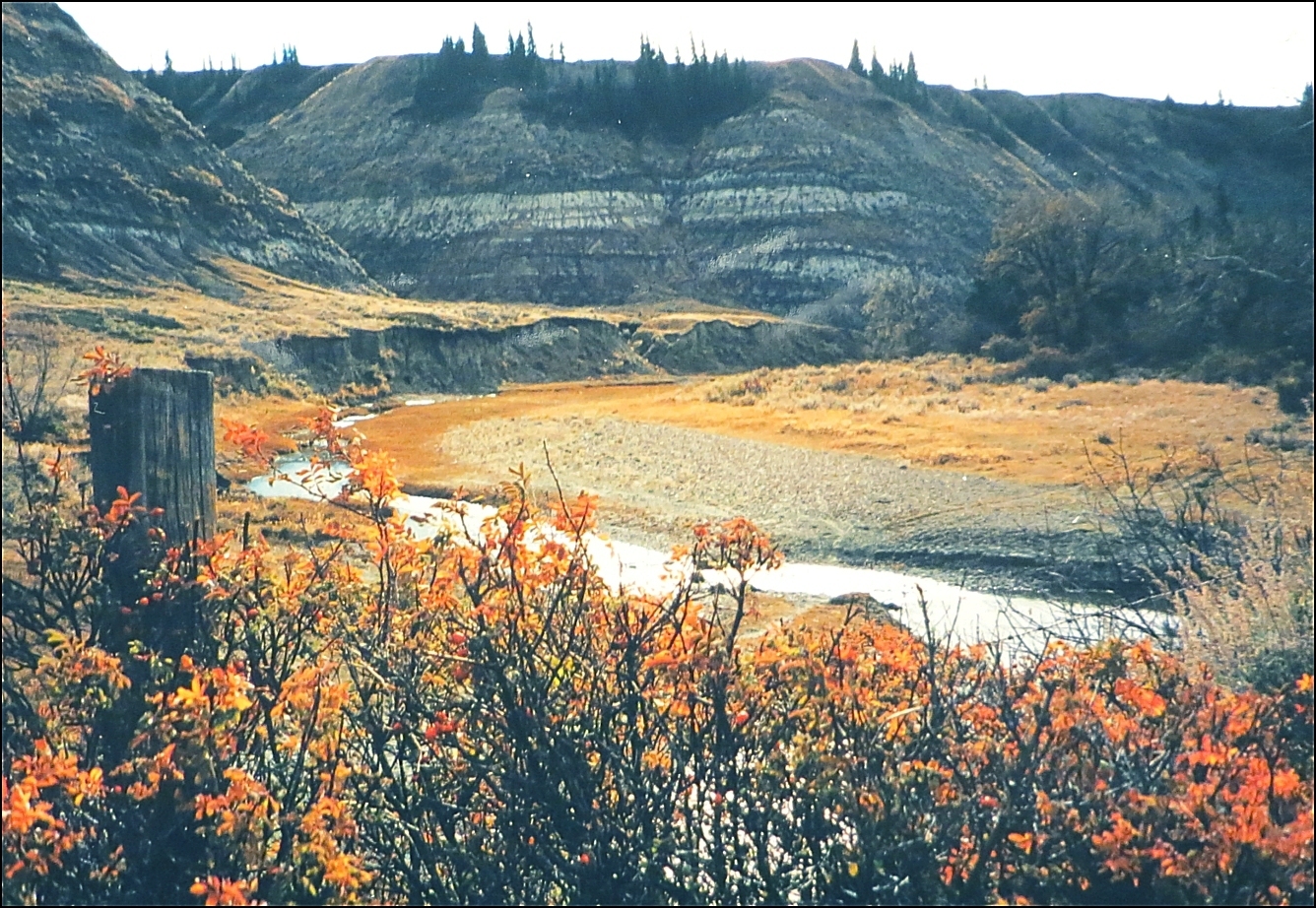 The Kneehills Creek in the fall. 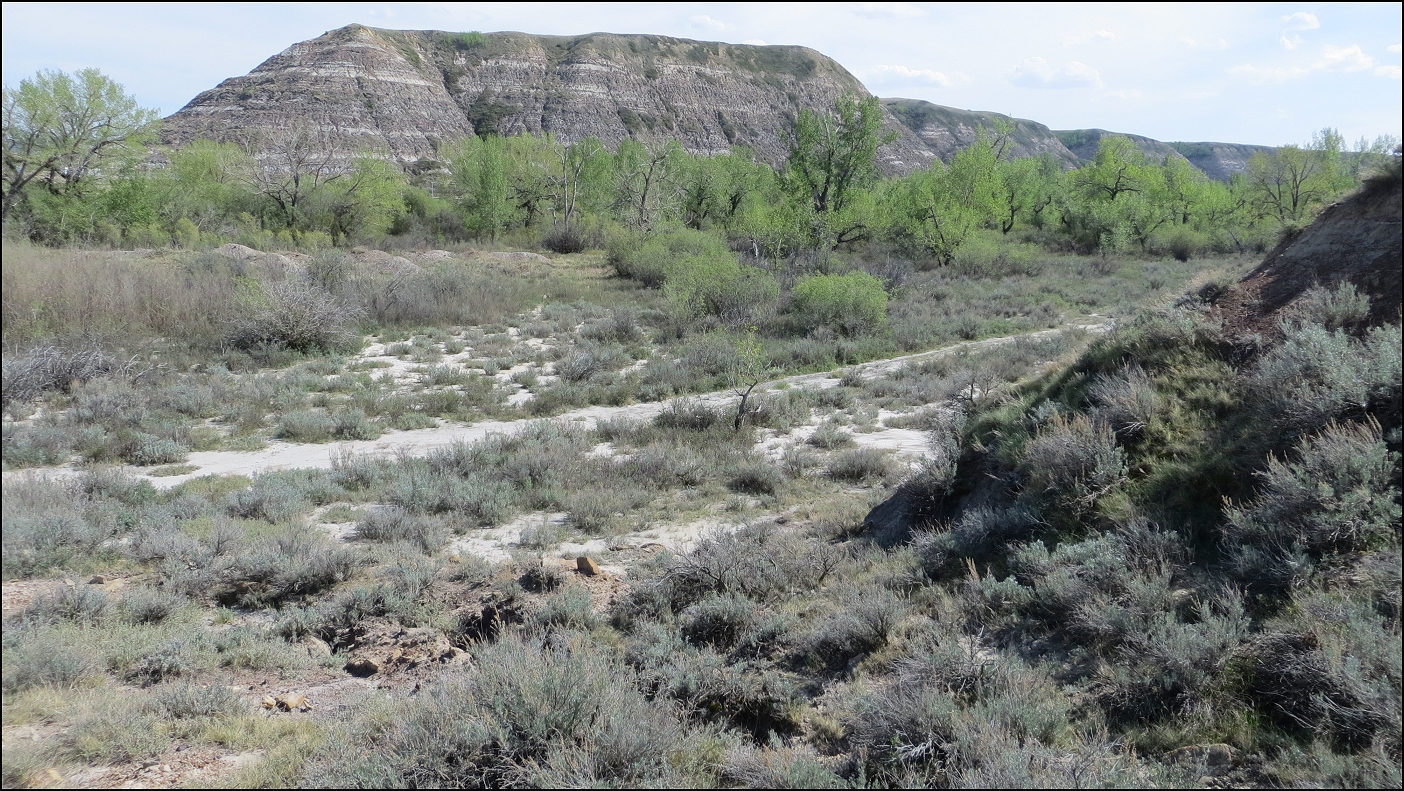 The end of the Kneehills Creek valley, where it enters the Red Deer River valley.
This is the kind of country they travelled over while at the bottom of the valley. 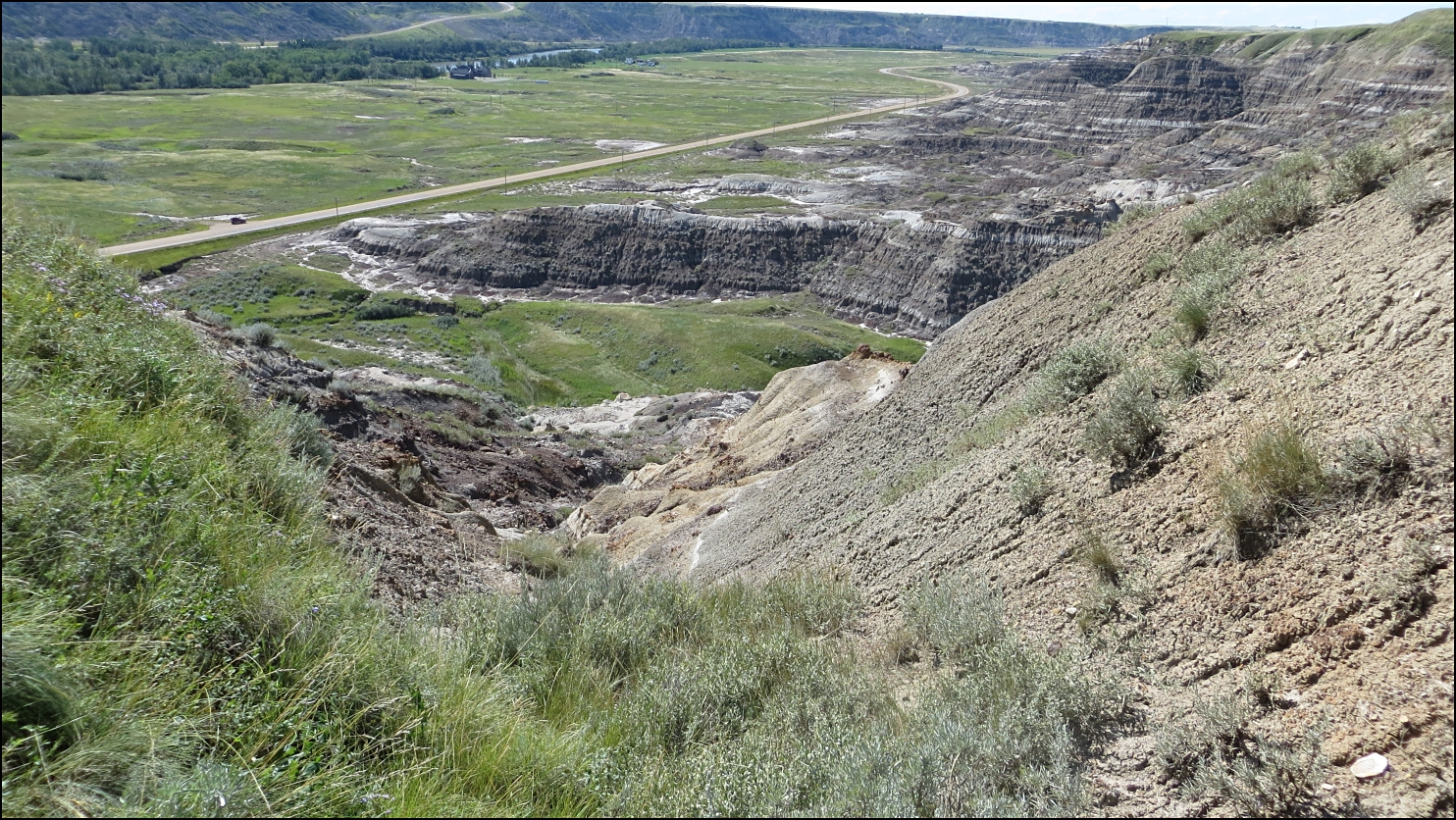 This is from the north side of the valley, looking west. The view shows where they travelled.
They entered the valley from the left of this viewpoint, then travelled up river to the Wigmore ferry which crossed the Red Deer river somewhat to the right of centre
of this photograph. After crossing the river, they came back down towards this hill. But this hill was much too rugged and steep to climb,
especially near the bottom. So the alternate route to Munson, a short cut, was another 100 yards east of this viewpoint.
There was a longer route, a wagon trail that headed north from the Wigmore ferry. But when it goes to Munson, it has to loop around the top of a coulee.
With hindsight and the help of Google maps, it appears to be the better route. But their shacks were built east of here, and a little south, so maybe the short cut was
too tempting. Or maybe they got bad advice, or used bad judgement? Also, Mary does mention at one point that "our horses were not heavy enough for the task."

CROSSING THE RED DEER RIVER ON A FERRY

When I climbed through the top, I was in the bushy area on the right, it wasn't too bad. 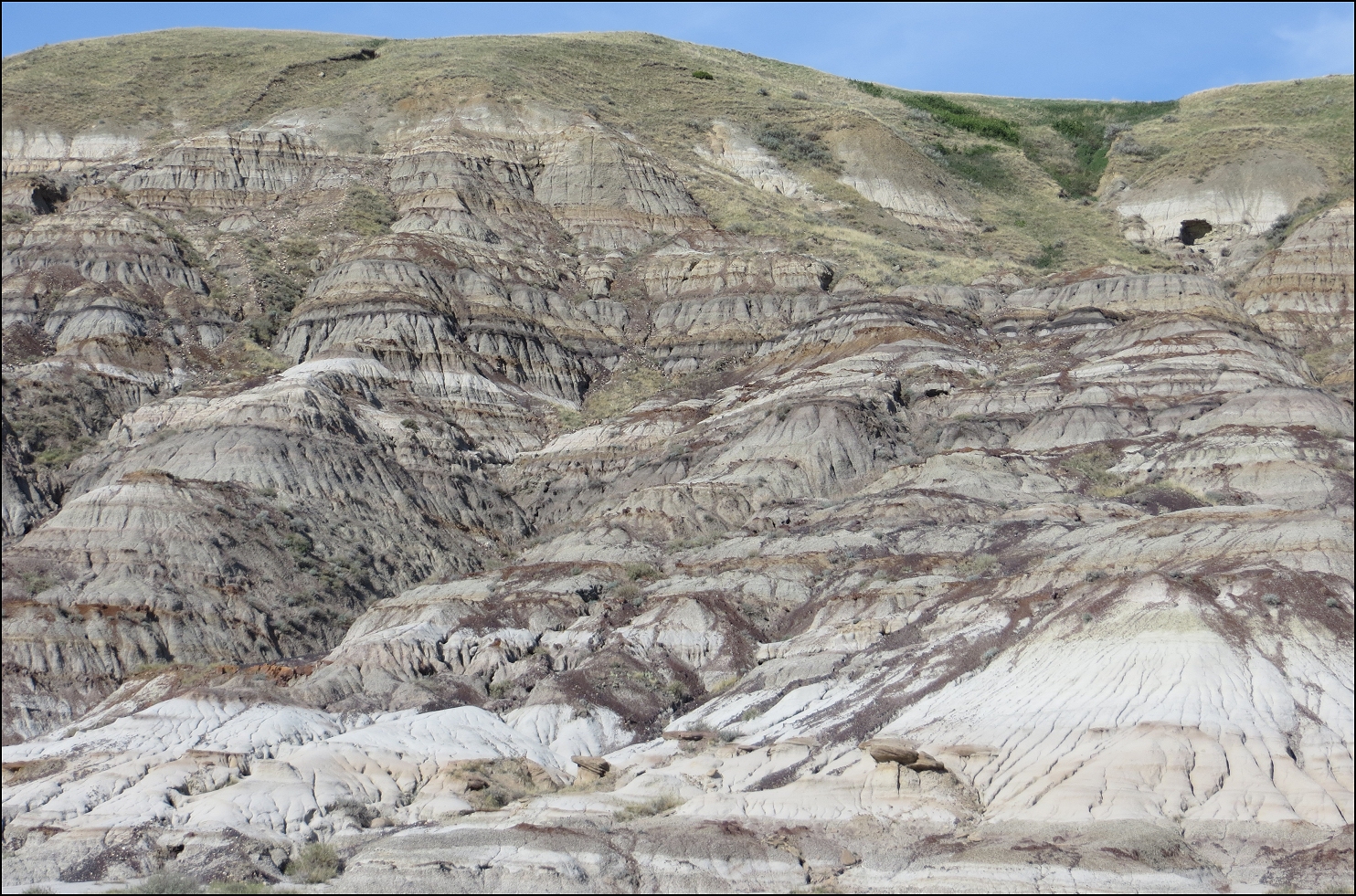 This is the hill they probably climbed. This photograph is looking north.
The next two photographs were taken on this hill. They show that this hill was probably the best choice to climb.
The route they took to the top was probably just to the left of the hole which is on the right side of this photo. The green
grass and short bushes near the top turned out to be on a decent slope with good footing, so was very climbable. 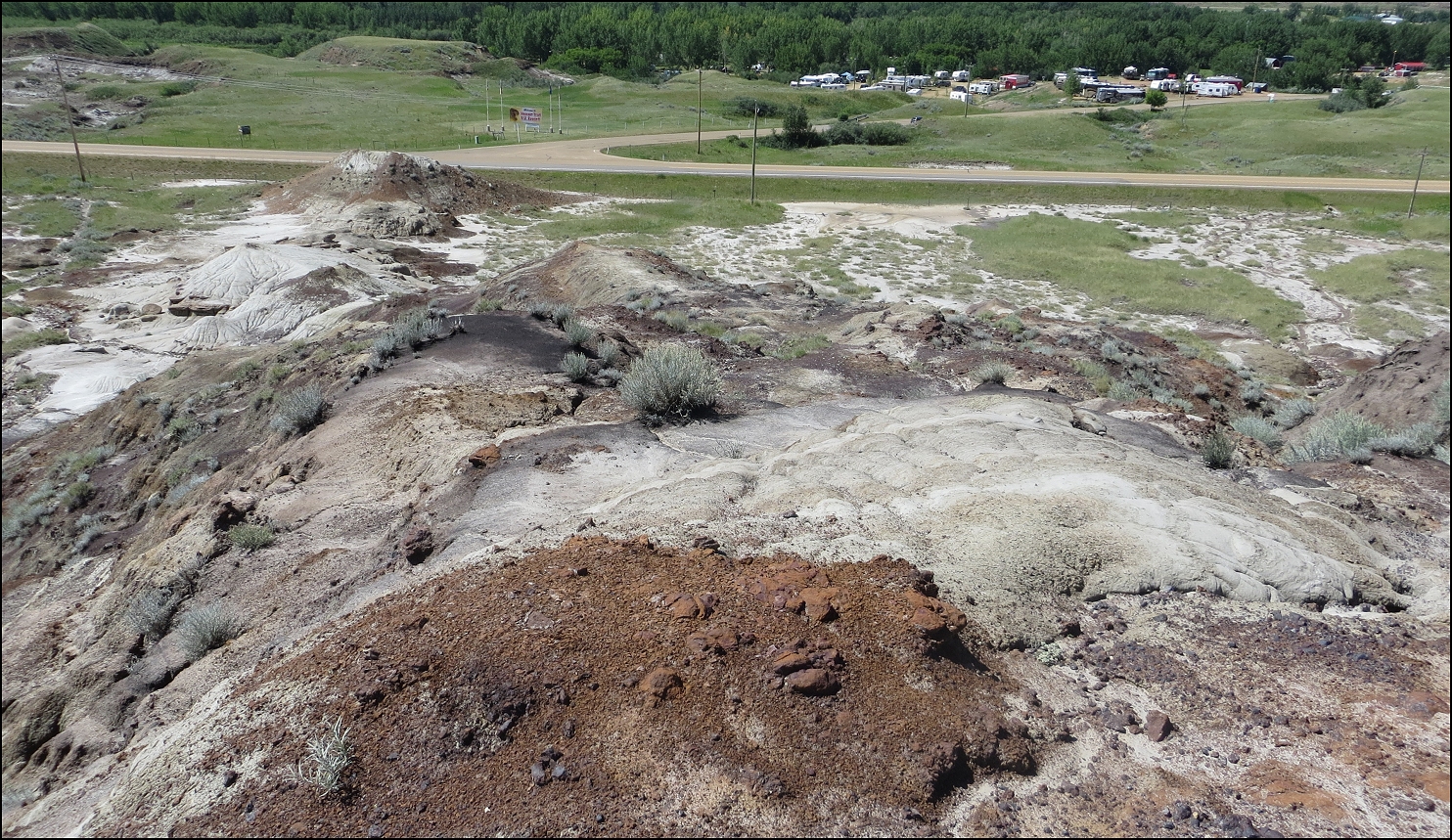 This looks down at the start of their climb. You can see a number of plateau's,
so they were able to climb up one step at a time, as described under the previous photograph in Mary's account of their journey. 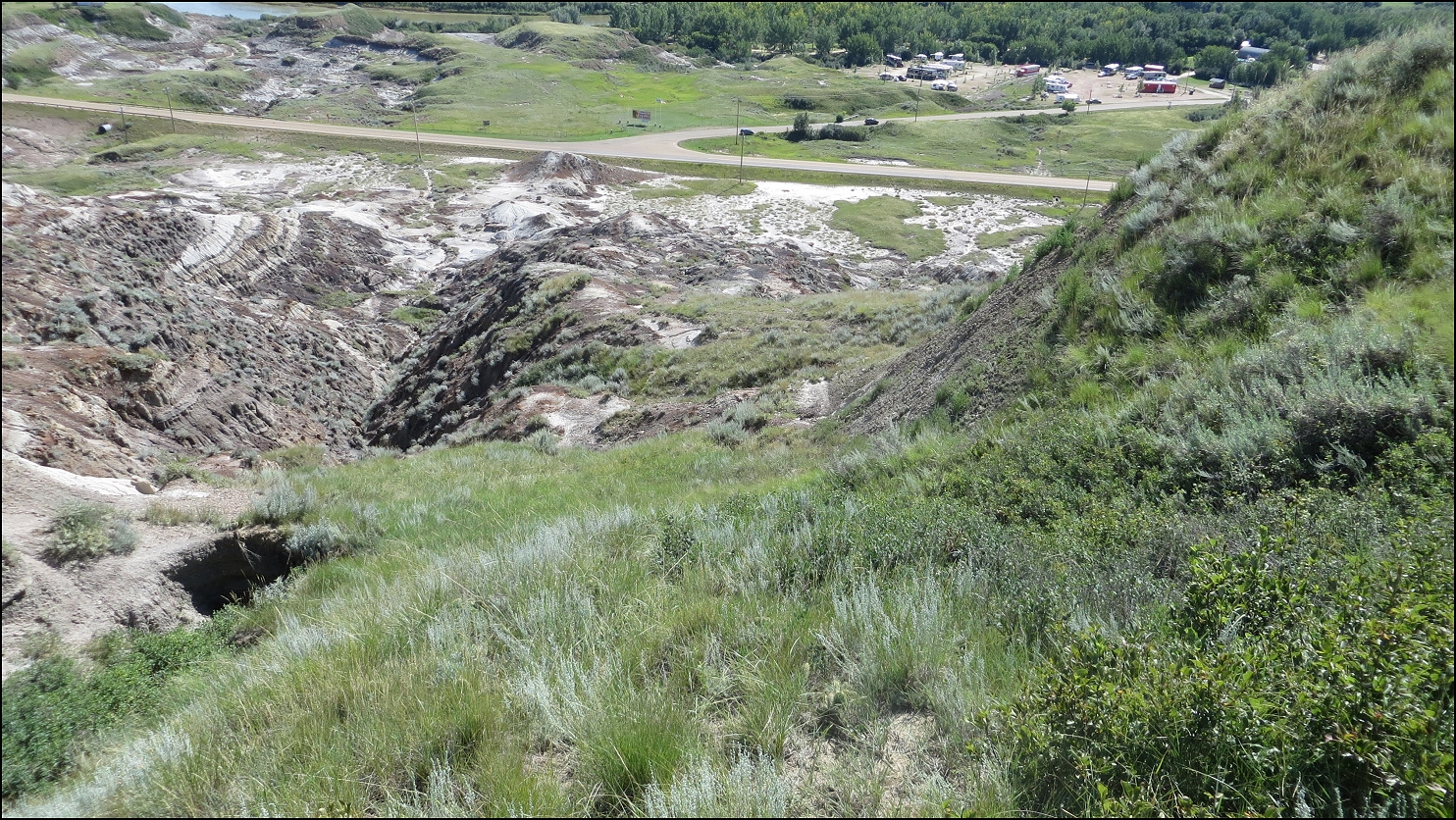 This is the hill they probably climbed, looking down from the top.
The steepest part of the hill is below, in the foreground. You can understand why Mary didn't want to remember
this particular experience. As well Violet didn't even mention it in her writings. 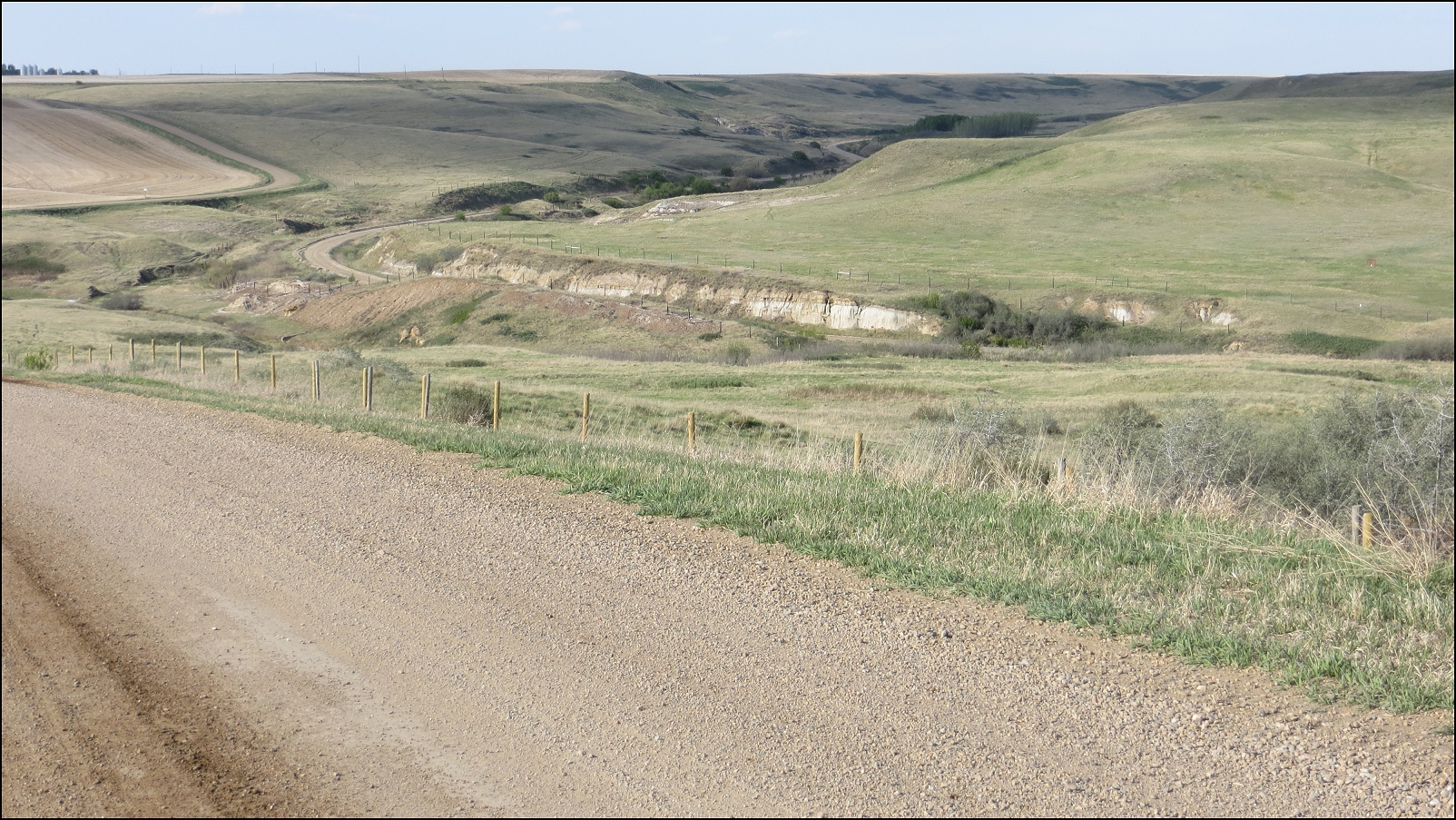 This is what they saw about a mile away from the top of the hill they had climbed the day before. The view, which is looking towards Munson in the north,
shows Fox Coulee. So they probably crossed the coulee at this point, and then struggled to climb up the hill on the right.
Their shack was south-east of here, so they were probably reluctant to head too far north. The gravel road you can see going up Fox Coulee is where the
railway tracks went. Before that, there was a wagon trail which came from a ferry over the Red Deer River at Nacmine, went up this coulee to just south of Munson.

UPSET WHILE TRYING TO CLIMB A HILL 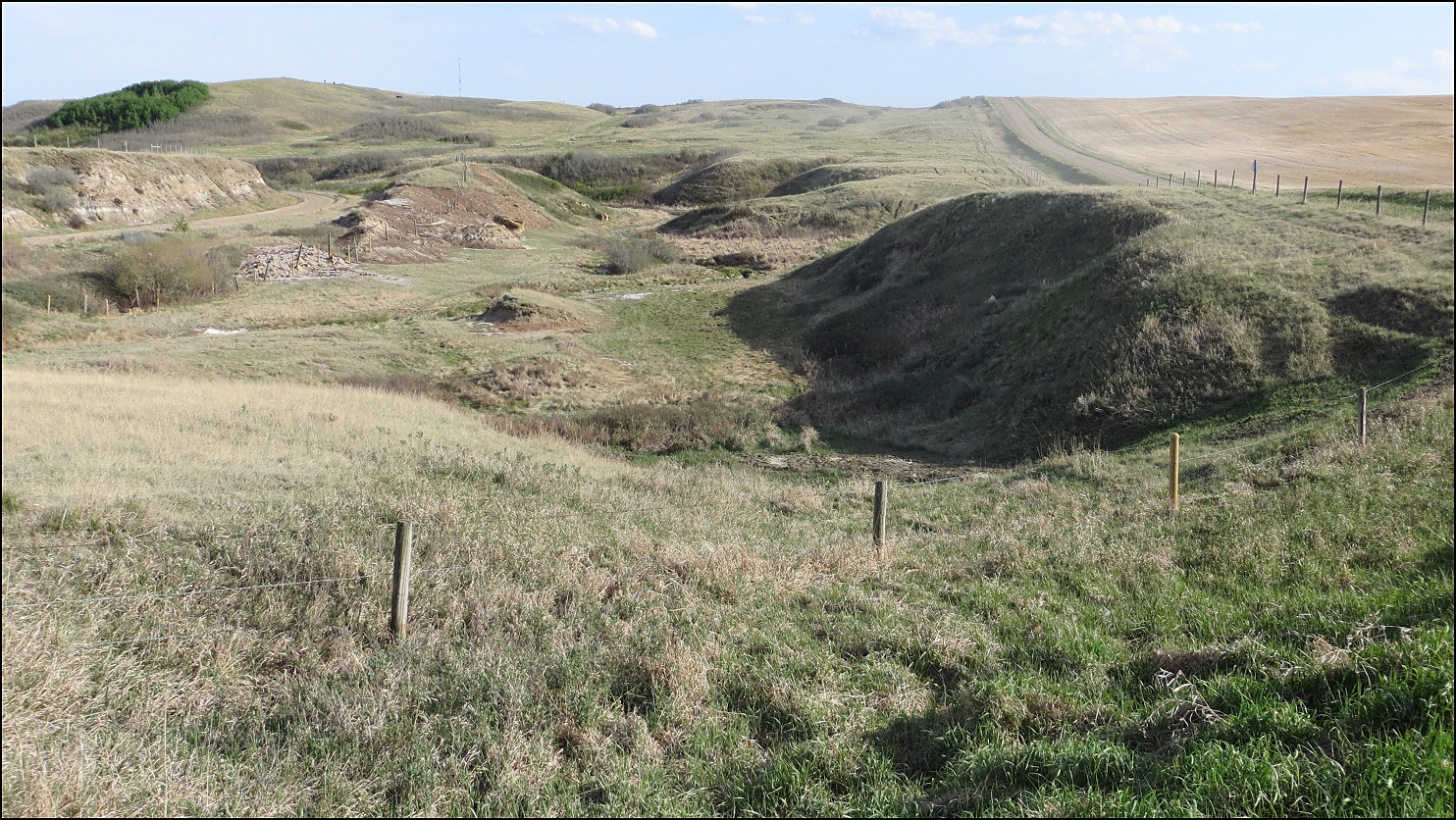 The previous photograph was taken from the top of the hill on the right. So this is a look at the bottom of Fox Coulee, the ground they had to pass over.
On the left is a gravel roadbed where the train used to go, and before that it used to be a wagon trail. 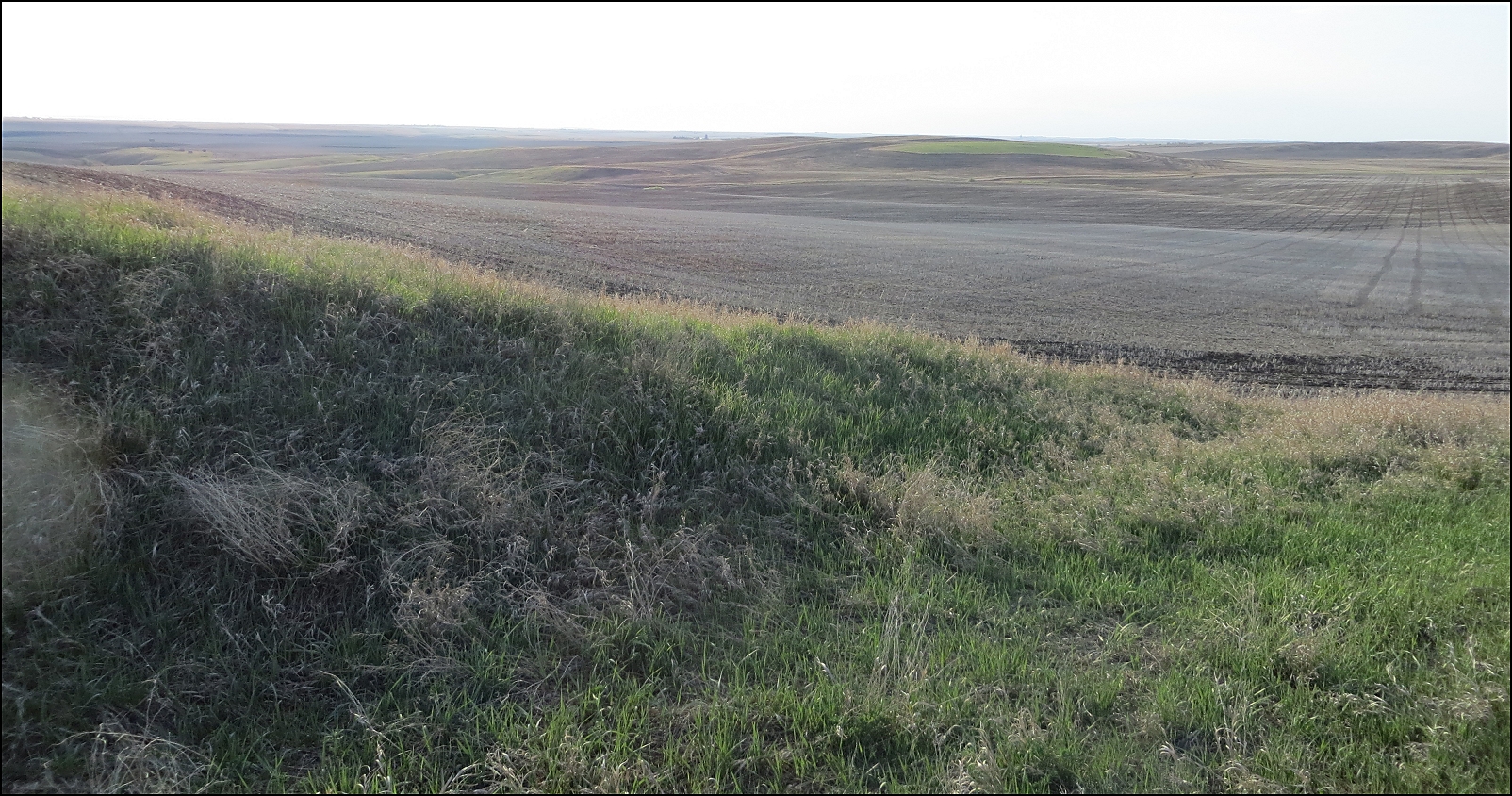 This is what Mary probably called turtle backs. Their wagon was not built to tilt sideways with a load on it,
so these formations were probably part of the reason why their wagon fell apart. 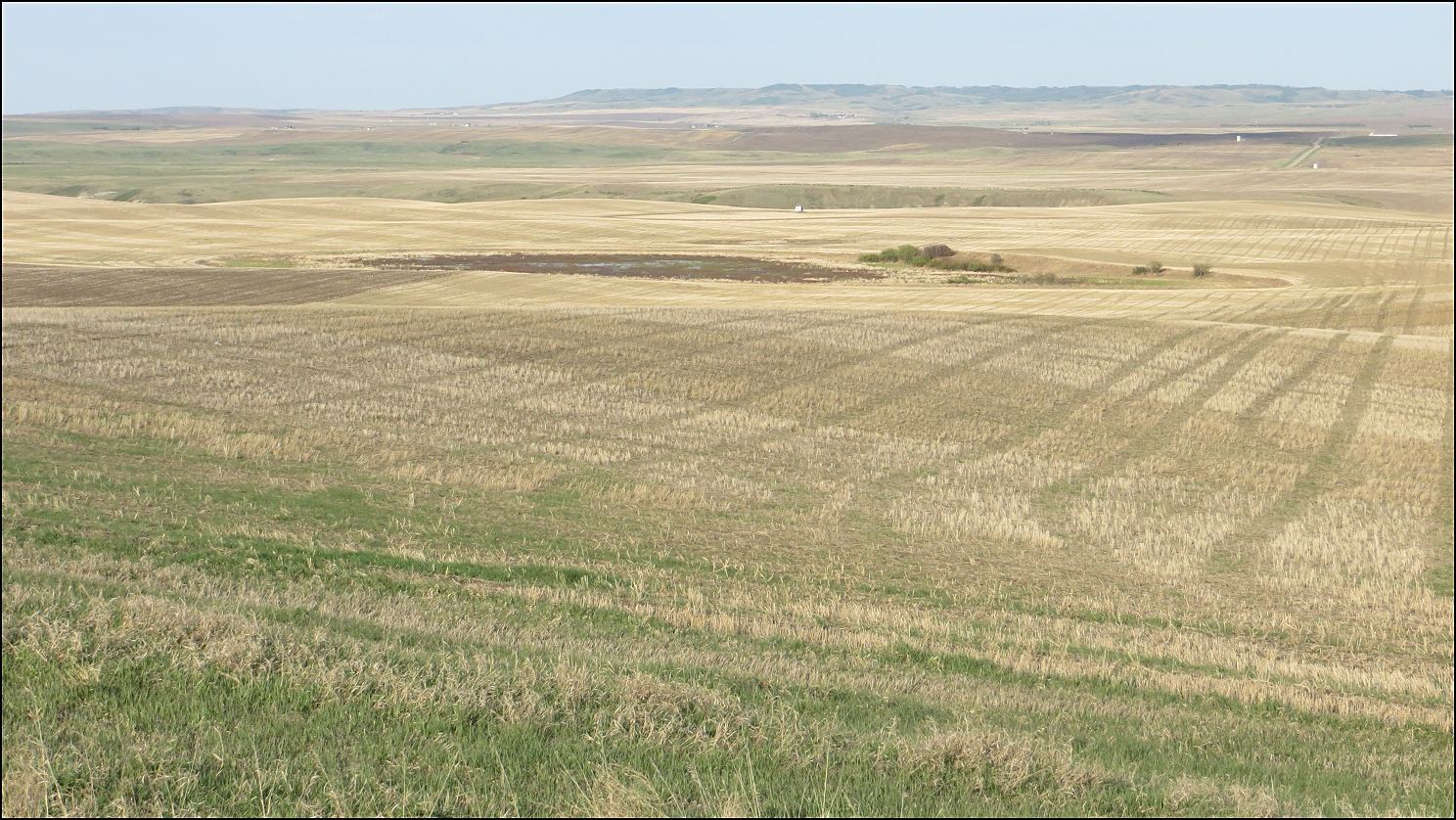 In the distance is the north end of the Handhills. On their journey this is probably the view they had in the late evening. It is very similar to the land where their shack was built.
It seemed strange that their district was named Verdent Valley. But when you approach it from Munson, or from the Handhills, it seems obvious that it is a valley. 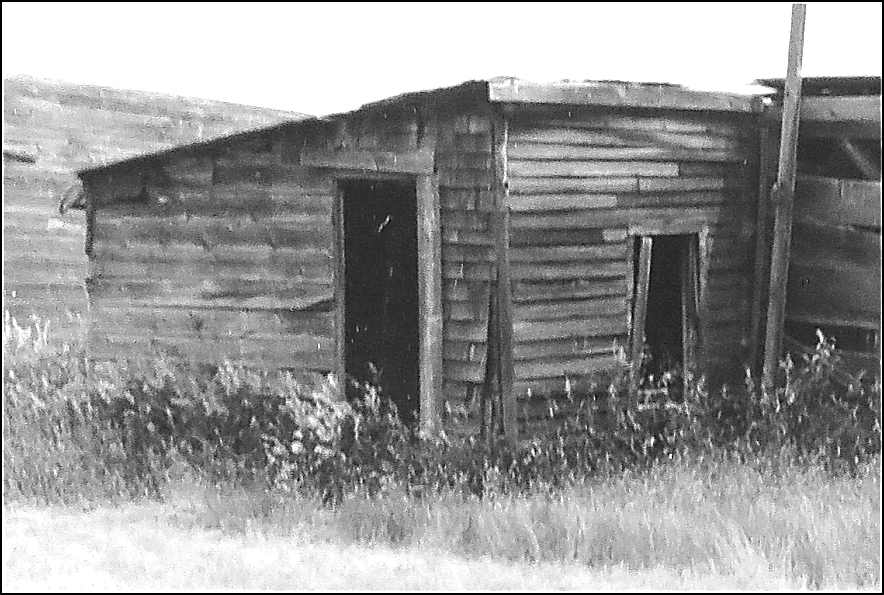 This is part of their original shack that was built in 1909. In the following years, they did expand. This photo was taken about 1995. 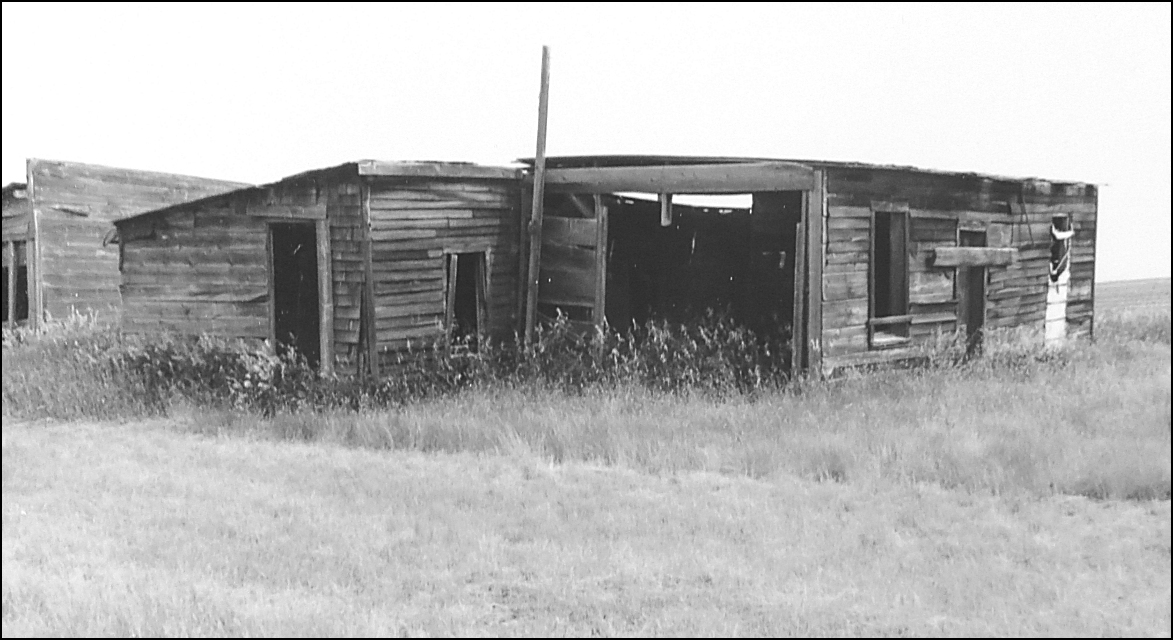 This is what was left of their expanded shack in about 1995. The addition was probably built a few years later. 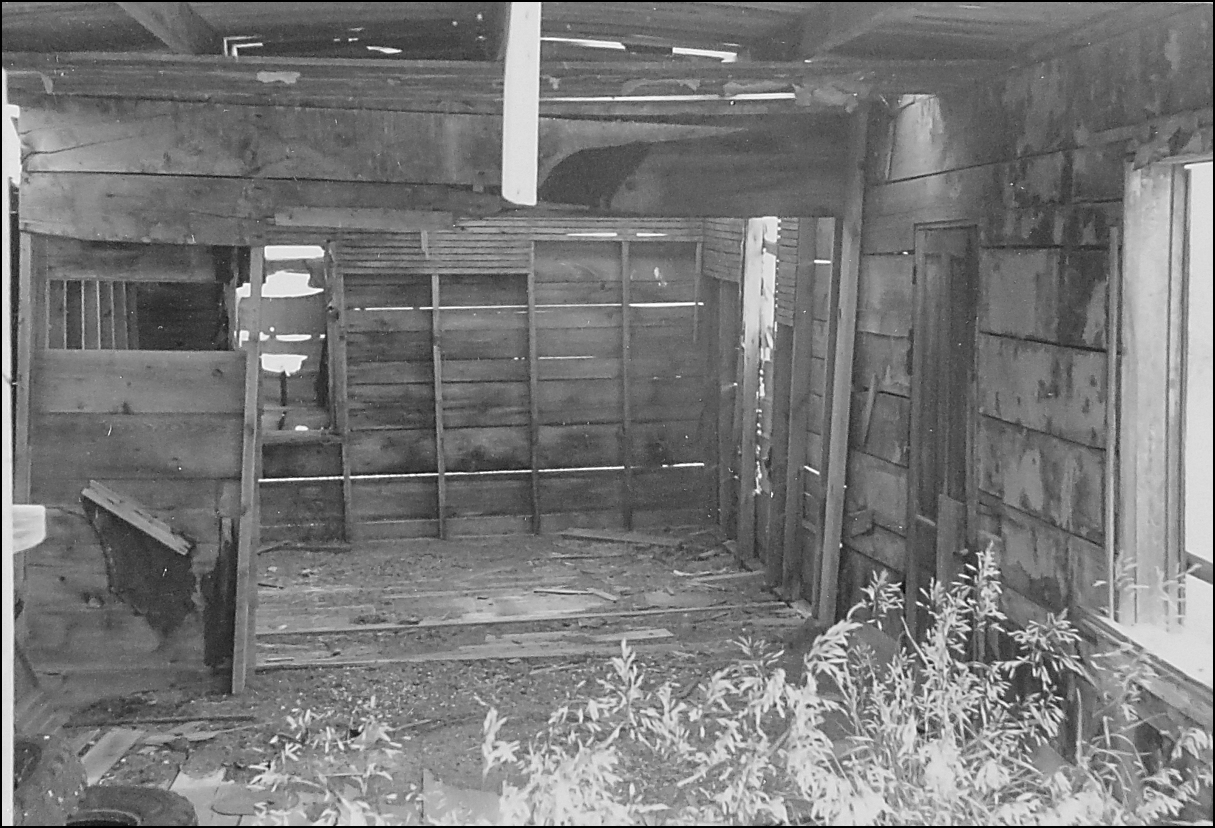 The full account of their journey, written by Mary Brown can be found
at a wordpress location which was created by Will Krueger.