PART 3 LIFE IN THE COMMUNITY

A Saturday trip to town was an experience that the whole family looked forward to. In the summer, everyone would take a bath in the milk house in preparation for their trip to town. The milking was done early; and after supper, at about 7:30, everybody headed for town.

They would arrive in Youngstown at about 8:00P.M. Everybody from the area would wonder up and down the streets, and visit with friends and relatives on the board sidewalks. They would also shop for groceries before heading home at about 10:30.

As time went on, Jack bred and raised draft horses. He broke them to work, then sold them to horse buyers that traveled the district. The buyers shipped carloads of horses down to Ontario to work in the bush.

The Zinn children attended a one room school called Crocus Plains. This room contained about 30 pupils who were in grades 1 to 9. As many as 7 Zinns were in this room at one time. They usually went to school by horse and buggy, but sometimes they walked the 2 miles (3.2 km). In winter, Jack or Sheldon would take them to school and then return again to bring them home. Each child had their separate lunch, which was packed in a jam tin.

The children played hopscotch, red light green light, anti-i-over (over the barn), and in the winter they made a pie like shape in the snow and played fox and goose. In the spring, at lunch time, they took cans of water out into the field and drowned gophers. Baseball was played in the middle of the school yard. Helen, Gladys, Roxy, and Lyla would often join the boys in a game of mixed baseball.

After the last day of school, they had a sports day in the school yard. Families would come to have a picnic, play horseshoes, and have a game of baseball. A ball team would often come over from the Keystone School to have a game.

In those days, girls always wore a dress to school. Gladys recalls wearing the same striped, black and white dress for the entire winter. Every weekend it was washed and pressed so it would be ready for another week of wear. The dress was complimented with long black itchy wool stockings.

At noon hour, Miss Weir, a young teacher, would get pushed and pulled by her students in a democrat (a buggy pulled by 2 horses). The students would push it into the ditch and pretend they could not get her out. They would all be late getting back to school.

People from the surrounding districts came to Crocus Plains for gatherings such as church on Sundays, occasional parties, the Christmas concert, the June picnic at the end of the school year, and the Friday night dances. Music for the dances was supplied by people in the community. There was Ethel Hughes on piano, Art de Young with his violin, and Charlie Meyers on the drums.

This is a 1989 example of a country dance
which was put on by one of Jack and Lou's grandchildren.

Myrtle Smithstead was the teacher at Lola May School (she is in the photo below), which was located about 4 miles north of the Bowie farm. One cold winter night, she went to a Friday night dance at the Crocus Plains School. She decided to keep her radiator water warm by draining it from her car and pouring it into a big pot on the kitchen stove.

Later in the evening, the ladies in the kitchen were pleased to find that somebody had already heated the water. They made coffee. Nobody liked it! Everybody sat around, sipped at their coffee, and complained that it was too bitter. When Myrtle was getting ready to go home, she discovered why the coffee was so bitter. It took quite awhile to gather some snow and melt it to fill her radiator. 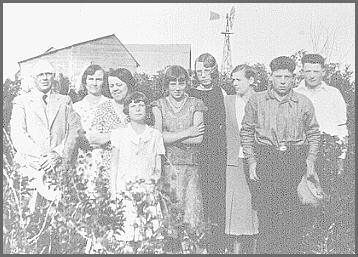 This is a group of Zinn's and friends in about 1930. From the left: Jack, Peggy Brown (a local teacher), Lou, Lyla, Roxy, Myrtle Smithstead (another local teacher), Gladys, Clinton, and Billy.

Christmas concerts were held at the Crocus Plains school. Everybody in the district showed up to watch the children do singing, plays, and marching drills. After a visit from Santa Clause, there was a dance. Many of the children stayed and took part in the dancing. Lunch was served at midnight and everyone went home.

Christmas was a busy time around the Zinn home. Lou started preparations weeks in advance. There were five bachelors living close by, who had no place to go for Christmas Day. Jack and Lou invited these men to share Christmas dinner. The bachelors showed their gratitude over the years, by bringing the Zinn’s mail and groceries from town.