Monday, Oct. 18, 1901.After the evening service several of us girls went under the care of Mr. Todd, to the Darky service. I will never forget it. I expected to see a company of Christians gathered for a prayer or class meeting led by one of themselves, but I found that most of them were not Christians, and that it is a kind of Mission conducted by a white man. Some Darkies caused a disturbance and the leader broke off in his address and gave them the terrors of the judgment. The singing was splendid and the room was nice and clean.

There was one old Darkie whose face was wrinkled with age. I thought he was beautiful.

Oct. 19, 1901. Beatrice, Belle, Gertie, and Anna have gone to their socials tonight. Such a time as we had getting them ready. One is decked out with my watch and chain and bracelet, another with my gold broach, another with my cat pin and side combs. 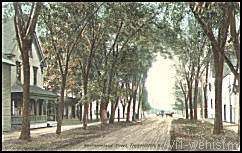 click to enlarge (73 kb)
Westmoreland Street, Fredericton, N.B.
From Violet's collection of post cards.
[Additional photos (and text) are included
in the detailed account and in the thumbnail
gallery which contains 28 images.]

Thursday Nov. 15, 1901. The smallpox is in St. John, is causing great anxiety here. Mr. Mullin advised us all to be vaccinated. I am waiting to see how things will turn. There is Diphtheria in Town too.

Thursday, Nov. 28, 1901. Edna James and I were vaccinated last evening. I kept clear of it as long as I could, but when I heard that we could not go home at Christmas without being vaccinated I thought I would have it over. It did not hurt at all.

I was out driving this afternoon with Guy Burten. I forgot about my arm, and hope I have not taken cold. There is lovely sleighing, and it is a beautiful day.

Dec. 3, 1901. On Monday evening Edna and I went to the Mission Circle at Mrs. Byron Coulthard's. They had a special program of solos and a debate, then a social time, finishing up with ice cream and cake.

Dec. 10, 1901. I was not out to Prayer meeting last Friday because I was suffering from vaccination. I did nothing on Saturday except learn a Recitation for the Public meeting at home. The girls had a meeting to organize a Y.W.C.A. for the Normal School in the afternoon. I was very sorry I could not attend.

Fredericton, Mon. Jan. 6, 1902. . . . . It was very dull in Bathurst. I could not help thinking of the jolly times we used to have in Alberton at Christmas, parties, invitations out to tea, etc. . . . We had a tiresome journey over today. We had such a time to make Papa "get a wiggle on" to get us to the station in time. If the train had not been late, we might easily have been left.

Jan. 11, 1902. I went to the Union meeting last night. Rev. Mr. McDonald. Pres. was the chief speaker. Some Mr. Adams spoke and among other things said that if he had his way he would put every male out of the Normal School. He believes that female teachers are so much better.

Jan. 24, 1902. We had a grand Prayer meeting tonight. Mr. Colder spoke, and I never remember hearing him do so well. I am filled with longings for the Spirit-filled life that a few people seem to possess, and I feel sure that I will have it some day . . . . "Oh, wondrous bliss, Oh joy sublime. I've Jesus with me All the time."

Jan. 31, 1902 (Violet is now attending Normal School in Fredericton) Today was Mr. Mullin's last day in Normal School. We gathered in the Assembly Hall with the Instructors on the platform. . . . Mr. Lord read a speech. Mr. Branscombe presented Mr. Mullin with a gold headed cane. As soon as the speech was over, we stood still and sang "Farewell Teacher." Then Mr. Mullin gave a grand reply. Then we sang "Auld Lang Syne." . . . . The boys asked Mr. Mullin to sit down, and as soon as he did they picked him up, chair and all, and carried him around. Someone carried the cane in front of him and they shouted the school cry. When he was going home they formed two rows and he marched through. We are all very sorry to see him go.

Feb. 5, 1902. Yesterday Mr. Mullin came in the opening. That set a good many of us crying again . . . . We went to see him off yesterday. He stood on the platform of the train and we gathered around him and sang, "God be with you till we meet again" and "Auld Lang Syne." The boys gave three cheers . . . . We came back from the station feeling as if we were returning from a funeral.

March 13, 1902 . . . We came back in time for me to go to the Social for the students in the Methodist Church. We had a jolly time there. Dr. Chapman made a few remarks at first. He said something like this: "Now we want you all to be very sociable this evening, to come close together, and have a good time, and if any of you wish to come closer together than you can this evening, you all know what a minister can do for you." This caused quite a laugh. Mr. Colter came along and talked to us then he went and brought two young men, College students, & introduced them to us. One of them, Mr. Howe, is from Stanley, & knew Papa when we were on the Nashwaak Circuit. There was coffee and cake passed around. There was no regular program, but they had some music.

I have my teaching and Model School over too. I taught "Limonite" to Grade Vlll. They all say I did very well. It was the last hour of the day & just after Recess, so the children were tired & restless; the steam was escaping from the radiator; some of the Observers were whispering; so everything was against me. Mr. Brittain was amused with the way I stuck to it. He said I improved very much as the lesson proceeded, & got, held the attention well.

June 26, 1902. We had a very good time coming home from F'ton. At Chatham Junction we spent most of the time outside. Belle got up upon a stand & gave us the Physical Exercises. We had also an open air concert. . . .

This is Water Street in Bathurst, N.B.
[Scanned from a postcard received in
Saskatchewan in 1908 by Mabel (or Maggie).]
[The oval mark shown in the distance is a postal stamp.]

Nov. 4, 1902 ( Teaching near Bathurst, N.B.).   . . . . dreariest period of my life yet. The cause of it all is that school. I have found it unmanageable . . . . The school was trimmed with boughs, and a Christmas tree. The children brought cards and pretty things to trim it with. One boy brought a dead rat which he was determined to tie on it.

At last the question has been settled as to whether I should go to University of New Brunswick or Mt. Allison and I am safe in Fredericton on 3rd year work with the Gloucester County Scholarship.