On March 26, 1885 the Metis defeated the police in a battle at Duck Lake. When the Natives across the Northwest found out that a rebellion had started, they became excited and restless.

The people in the town of Battleford and surrounding area feared the worst. They moved into the fort for protection and left the town deserted. Poundmaker took his followers to Battleford in hopes of getting food. But the Indian agent refused to come out of the fort. Now, Poundmaker could not stop his young warriors from going into the deserted town and plundering it.

A few days later, news that a rebellion had started reached Big Bear's camp. The Warrior lodge, led by Wandering Spirit, took control of the camp. They went into the White settlement of Frog Lake, plundered the contents of a store, borrowed some government horses, and took some White people prisoners. The Natives then found some alcohol and began to drink.

As more shots rang out. Big Bear rushed from a house yelling, "Stop, stop!" But it was too late. The braves shot nine White people, including two priests. Two women and one man were taken prisoner and given protection by others in their camp.

The White people across the plains heard what was happening. They feared for their own lives because they realized that all the Natives might join together in a huge war. But, when the government sent out fresh flour, beef, tea, and tobacco many of the Natives lost their desire to fight.

The warriors decided to attack Fort Pitt, the closest fort to Frog Lake.

Meanwhile, the 67 people in Fort Pitt realized they couldn't escape because they didn't have enough horses or wagons to get away. They were extremely vulnerable. The fort had been built for trading, so it offered very little protection. It was mainly the job of the 23 police there to protect the traders, women, and children. They all worked to prepare the fort for an attack.

Wandering Spirit and his warriors journeyed to Fort Pitt. About 250 warriors made their appearance on the ridge north of Fort Pitt. Then they set up camp, and soon were joined by Big Bear and the rest of their band.

Big Bear helped them come to an agreement. He then dictated a message which was sent to the police sergeant in charge of the Fort. It stated in part:

. . . I want you all to get off without bloodshed. We had a talk, I and my men, before we left our camp, and we thought the way we are doing now the best - that is, to let you off if you would go. So try and get away before the afternoon, as the young men are wild and hard to keep in hand.

The police were allowed to get away. They used a boat to float down the river to Battleford. The other 44 in the fort gave themselves up. They walked up the hill to the Cree camp where they were kept safe as prisoners. Meanwhile, the warriors took what they wanted from the fort and then burnt it.

The Battle of Cut Knife Hill (May 2):

Immediately after the Frog Lake massacre and the Metis battle at Duck Lake, the government formed an army and it headed west. Colonel Otter and 350 troops were going to face Poundmaker and the Cree. The troops got off the train at Swift Current, then marched north to Battleford. Without making an attempt to negotiate with the Natives, Otter and his troops left Battleford at dusk and marched all night to Cut Knife hill.

In the early morning, they arrived at Cut Knife hill and started to climb it. It just happened that Poundmaker's sleeping camp was at the top. An old Cree who was out for his usual early morning ride heard them. He woke Poundmaker's camp and the fighting began.

Otter had his field guns fire at the Cree camp. A small group of Stoney warriors feared that the women and children in the camp would be hit, so they immediately made a brave charge in an effort to silence the guns. Two of them died in this early fighting.

The soldiers formed lines of defense along both sides. In the center of the field was a small depression where they were able to keep their wagons and horses. The Natives attacked from the nearby bushes. 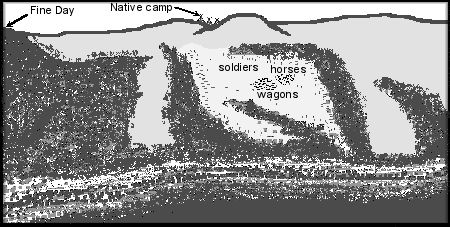 This is Cut Knife Hill.   The creek is along the bottom and the light gray area is open grassland where the soldiers were. The Cree fought from the bushes.

The War Chief in Poundmaker's camp, Fine Day, organized the Cree braves. It is believed that Fine Day directed his braves from the top of a distant hill. The Cree would attack in small groups and then withdraw and attack from another area. This confused the soldiers. They were not sure where the Cree were, so could not attack; and they were not even sure how many Cree they were fighting. The troops were surrounded. It crossed the minds of many that only nine years before, in the United States, Custer had also been surrounded. Custer's entire regiment was wiped out by Natives.

By 11 A.M. Otter began to organize a withdrawal. Now, the troops were vulnerable, so some Cree mounted their horses and were ready to attack. But, Poundmaker rode between them and the soldiers and advised them not to attack. This ended the battle. Eight soldiers and six Natives had died.

A Lieutenant later wrote that there was a new respect for the Natives: "They fought in a way that surprised the police, who have been accustomed to look upon them as arrant cowards. They are the beau ideal of skirmishers, expose themselves but little and move with marvelous quickness."

to the second part of the Rebellion.