Jan. 23   We spent the hole afternoon outside throwing snowballs at cars and then jumping off the garage.

Jan. 24   I dressed warm, with lots and lots of clothes on, and went tobogganing.

Jan. 30   It was Bruce's Birthday and did he ever like the candle on the cake. We had lots of fun.

Jan. 31   The snow was good for snowballs. First we had a fight with Gean M. Then we went over to the Y and had a fight between us and them.

Feb. 1   In the afternoon we through snowballs at girls.

Feb. 3   We had a snowball fight with Stanley Jarvis. He is about 15 years old.

Feb. 4   After school, we fooled around throwing snowballs at girls.

Feb. 5   We didnĺt do much but dammed up the water in the streets.

Feb. 6   We took some botles down town in the afternoon.


[We collected bottles and when we turned them in we were paid 2 cents each. (Sorry about the spelling errors, but I decided to leave the initial entries the same as they were written.)]

After supper I listend to Hockey Night In Canada.

Feb. 9   In the morning, I went to school and came home losers 2, in the afternoon, I came home winners 24 marbles.

Feb. 14   It was valentimes day and we didn't know what to do. We finaly thought of going skating. So we went skating.

[Dad ran a chicken hatchery so he needed cardboard boxes to carry chickens when they were sold. He paid us for punching holes, folding, stapling, and putting filling into the boxes.]

[What was it like working in the basement? Experience the unique atmosphere as you look at a photo and read a few comments about the basement (75 kb).] 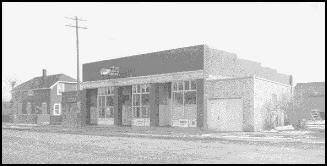 This is our hatchery and house.

Feb. 19   We got our air plans. Bob and Wayne got a moterd plane. I got a glider. Mine still can fly good. Bob never flew his. But Wayne did.

Feb. 20   Bobs was the poorest. But now it is the best. Bob flew his from the middle of the stockyards to banges.[our neighbor] Wayne's plane glides better.

Feb. 21   We went half way out to Sturit Russil's farm [on our bikes]. On the way back we stopped to explore at a hill of bentinite. Then we played hide and seack.

Feb. 22   After school we went to the show. It was about The quiet Man. After the show I went to Tyro.

[We only had one movie theatre in town, so when it was time to go to the movies, we had to hope it was a good show. They usually showed good movies for children, especially if it was a matinee. But, I vaguely recall as young boys, seeing boring musicals, horrible love stories, and at least one depressing film noir type movie. We didn't have any alternatives, so we had to accept the movies that the theatre brought in. Now, half a century later, as we enjoy lots of choice at our fingertips, every minute of the day, we can appreciate how it was back in the '50's.]

[I am left wondering if I got sick because of the movie I saw on the previous day. As a young boy, I was extremely quiet and shy so I probably identified with the main character who went through some rough times.]

[ September 28, 2010:   ]
[So 56 years later, I finally saw the movie The Quiet Man. The vague memory I have is of expecting that, as a quiet child, I would grow up and have similar experiences to the quiet man. (The movie was directed by John Ford, staring John Wayne as The Quiet Man.) John Wayne was a likeable actor who was easy to identify with. However, he played a tough fighter who was mean and difficult to a hot tempered, mostly irrational actress. Even now I find that how they treated each other is disturbing. The film ends with a battle over money, then a prolonged and intense fist fight that he had tried hard to avoid.]

[So I probably got sick on this day because, as a fearful child, I knew deep inside that when I grew up I wouldn't be able to handle any of this. I didn't realize that the likeable actor was playing a character who was radically different from me. He was from a tough background, which would have toughened him up; but this wasn't shown in the movie. So the movie impacted me deeply, and I probably never tried to talk to my parents about it.

Feb. 24   After school we played hide-and-seek.

Feb. 25   When I came home from school, I was winners fourteen. Billy C. thinks heĺs a shark. I won about 7 marbles off him.

Feb. 28   Bob Brennand had a fight with Joe Parson.